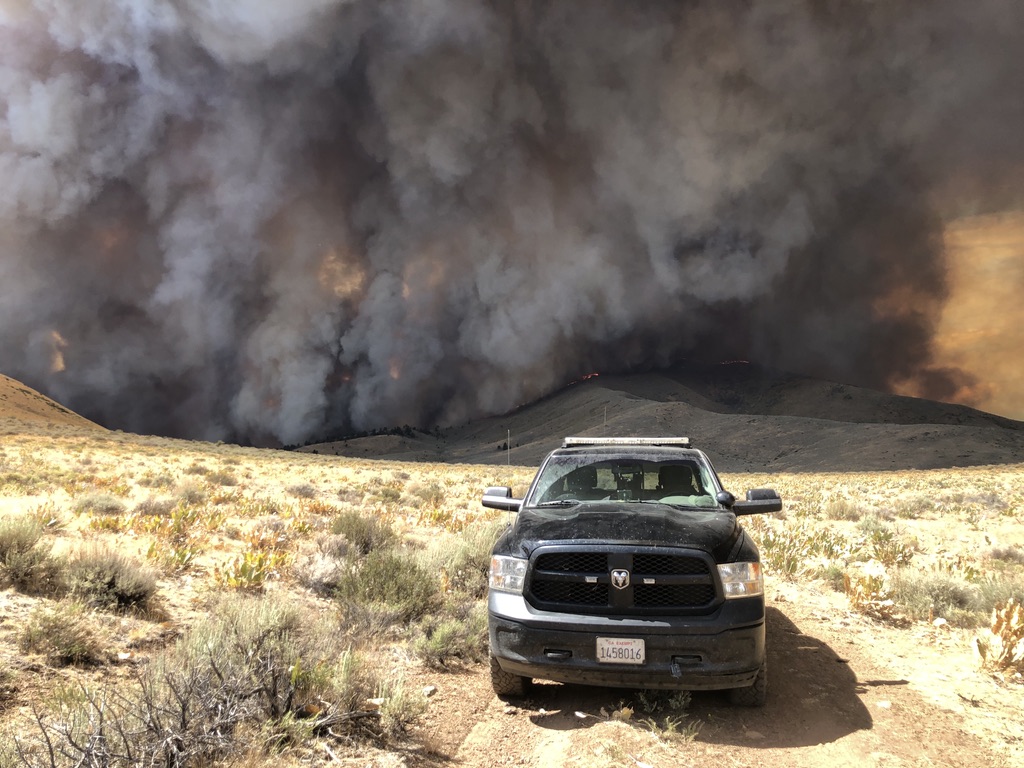 Wildlife officers are more and more frequently called upon to help with fires as a result of requests for Mutual Aid from the Governor’s Office of Emergency Services (CalOES). We are assisting with evacuations, both human and animal, enforcing mandatory evacuation zones, patrolling for looters, and responding to calls for service on fires up and down the state.

Many thanks to the multitude of first responders, especially fire and law enforcement personnel who put their lives on the line to keep us safe during fire season. 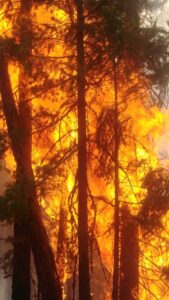 Only someone who has been this close to an inferno can comprehend the magnitude and awesome power of wildland fires. Photo by Warden Zeke Awbrey.

One story stands out from recent weeks of wildlife officers working the northeast area of California. What do you do if 50 rangeland cattle are in the direct line of a raging fire? Read an incredible human, equine, canine, and bovine rescue story below…

On August 15, a fire erupted near the 13,200-acre Hallelujah Junction Wildlife Area (HJWA), split between Sierra and Lassen Counties. It was opening day of archery deer season. Lt. Kyle Kroll quickly changed from normal patrol duties to emergency evacuation duties. Kroll drove into the HJWA to warn any hunters to evacuate. As the last hunter left, he told Lt. Kroll that he saw a rancher drive his truck and horse trailer in the direction of the oncoming fire. Kroll surmised the rancher may be attempting to save his cattle on a grazing lease just north of HJWA. He drove his patrol truck toward the fire.

“I closed in on a completely uncontained fire line and came upon an image that will be forever etched into my mind of a sole cowboy on a horse, with two skilled cattle dogs trying to herd 50 head of cattle out of harm’s way”

“I closed in on a completely uncontained fire line and came upon an image that will be forever etched into my mind of a sole cowboy on a horse, with two skilled cattle dogs trying to herd 50 head of cattle out of harm’s way with fire closing in on them and a monstrous black bank of smoke billowing up to the sky,” said Lt. Kroll.

The cowboy on his horse and the two dogs were making progress but the approaching fire prompted Lt. Kroll to help anyway he could. Between re-positioning his patrol truck and helping herd the cows on foot with nothing more than a stick, they herded the cows toward a gate into the HJWA. Range cattle are often more difficult to herd than other cattle and several individuals darted away from the rest, challenging the skills of their human, equine, and canine rescue squad. Working together, they managed to herd all 50 of the cattle onto the Wildlife Area, then farther south to a safer place.

With not a moment to catch his breath after herding cows with a stick, Lt. Kroll went on to assist the Lassen and Sierra County Sheriff’s Offices and CHP with evacuation of residents from the Scott Road area near the junction of HW 395 and HW 70.  Once that task was finished, he raced back to the HJWA to try to save whatever equipment resources he could, especially a patrol truck assigned to a member of his squad. Soon, CDFW Fish and Wildlife Technician Lauren Pilatti, who helps manage the HJWA, arrived to assist. A U.S. Bureau of Land Management Ranger also helped shuttle vehicles. Working together, they moved all of CDFW’s major equipment to either to the Long Valley Agricultural Check Station or whatever major paved parking area they could find.

The fire garnered national news as it spawned a fire tornado, a rare extreme fire event caused by a multitude of unusual weather conditions amidst a raging fire. Approximately 41 percent of the HJWA burned that day including one barn, but they equipment they moved off the property was spared. Every cow survived.